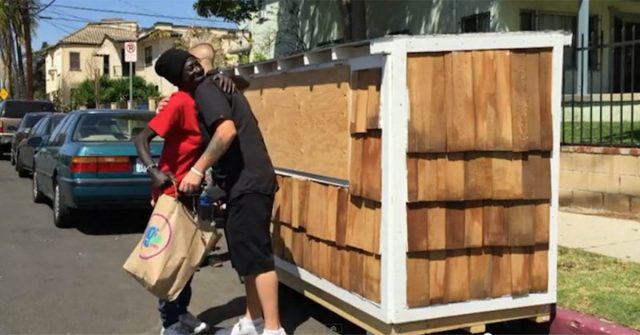 When a kind man learned that a local homeless woman was sleeping on hard concrete; no boxes, no tent, he went to his local hardware store and built her a tiny house on wheels himself.

Elvis Summers has an apartment in Los Angeles, and most mornings he is greeted by a friendly 60-year-old homeless woman named Smokie who asks him if he has any extra recyclables. After several encounters, the two began having regular conversations and became friends.

Elvis asked Smokie about where she was staying, and she would humbly just say that she was “living down the street.”

“I know you told me you lived down the street, but I mean where exactly do you sleep?” Elvis asked.

To his surprise, Smokie shared that she just slept next to a building a few blocks away, no tarp, no tent or boxes, just on the hard concrete.

“I figured she at the very least had a cardboard box, a tarp, or something, but she had none of that,” Elvis said. “She was like, ‘Well, I don’t have anything [so] I just sleep next to the building.’ “


Elvis learned that Smokie had been married previously, but her husband passed, and she ended up losing her house.

Feeling a deep sense of compassion for this sweet homeless woman, Elvis decided that he was going to do what he could to help her. He skipped some of his own meals and bills in order to budget and buy the materials needed to build Smokie a tiny house: one where she could sleep in comfort.

“That got me. I just jumped in the car and went to Home Depot. I was like, ‘Screw it.’ I mean I skipped on buying a little bit of food – a lot of bit of food – skipped on a couple of bills and just made it happen.”

Elvis had read an article about a man in Oakland who had been making tiny houses out of discarded material, so he thought he’d give it a try. He Budgeted around $500 to get the materials, which included a front door, two locks, a window and sturdy wheels to go under the house. The roof shingles and siding were out of his budget, but a kind manager named Rick from Allied Building kindly donated them for Smokie after Elvis shared with him what he was using them for. It took five days to build, and Elvis created a time-lapse video of the construction.

“I had nowhere to really build it, so I just built it in the street outside of my apartment. The local LAPD cops have been super cool, and have told me they support it, as long as we move it to a different spot every 72 hours.”

The finished product is beautiful, and Smokie shared that sleeping in it has given her a sense of peace and relaxation that she hasn’t felt in a very long time.

“I felt so good,” Smokie said of her first time in her new home. “I was so relaxed. I think I must’ve slept half of the day.”

Elvis even included a little sign for the front door which reads, “Home SWEET Home.”

After seeing Smokie’s happiness from having a comfortable and safe place to sleep, many kind hearts reached out to Elvis and told him that they wanted to help support his cause, so he created a nonprofit named The Tiny House Project.

“I’ve met so many homeless people, good people,” Elvis said. “Since I built Smokie’s, I’ve had several people ask me to make them a tiny home and it’s turned into much more than just the one house.”

Watch this time-lapse video of Elvis making and giving Smokie a new home:

City Lovingly Builds Tiny Village For Homeless Veterans: 50 Tiny Houses Where They Can Live For Free

3 Kind Friends Invite Widowed Stranger To Sit With Them On What Would Have...

Instead Of Getting Angry At A Driver Who Gave Him The Finger, He Decided...