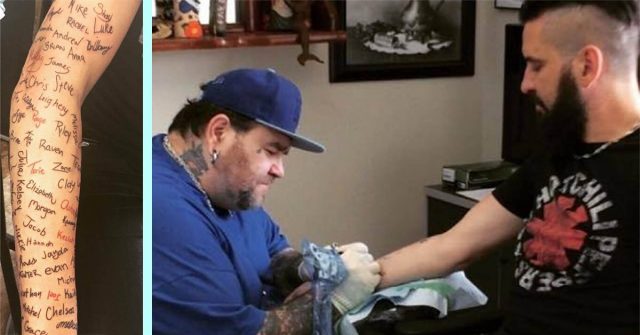 Robb Nash left his career as a professional touring musician to begin giving motivational talks at high schools for students going through difficult times and who may be considering suicide.

Robb’s journey began several years ago, after receiving an urgent phone call from a high school principal. He explained that one of his school’s students had committed suicide, and that she had left a suicide note revealing that her and her unnamed friend had a suicide pact. The principal knew that Robb was a professional musician who had been using his platform to reach out to teens, so he asked him to give a talk to his school in the hopes that it could reach the other girl and potentially save her life.

Robb came to the school, and as students were grieving the loss of their classmate, he opened up to them about his own difficult past, and how he too had been suicidal during his darkest moments… no longer wanting to live.

“I know someone in this room is having these feelings,” Robb said to them. “You’re not alone.”

After his talk, a girl waited for the rest of the students to leave and then approached Robb, and handed him a note. It was her suicide note, as she had been planning to kill herself that weekend.

After this experience, Robb realized that there could be a young girl or young boy in every high school with a similar note, who feels like they’ve been pushed to the edge, without a friend or someone to talk to who can understand them. He has since made suicide awareness presentations the purpose of his life, sharing his own personal story and hoping to reach the children who are considering taking their lives, and instead giving them a reason to live.

During Robb’s presentations, hundreds of teenagers have come to meet him afterwards, reaching into pockets and backpacks to hand him the suicide notes they’d been carrying. It’s their way of saying: I won’t be needing this anymore.

Robb’s personal story in one which often connects with many of the students. Robb, who was a popular athlete during his senior year in high school, was driving one night with his friends on an icy road. At 17 years old, he felt confident and invincible, and while trying to pass a car, had a head on collision with a semi-truck. His friends all survived the accident, but Robb had been pronounced dead on arrival by the paramedics.

At the hospital, doctors worked to revive Robb and he was miraculously able to survive. They rebuilt the left side of his skull, his clavicle and his shoulder using steel bolts. When Robb woke up, he didn’t remember what had happened, but he was in a severe amount of pain.

For a long period of time, Robb felt angry and bitter. He could no longer play sports, couldn’t work manual labor jobs, and hadn’t finished school so he couldn’t work an office job.

“Every option I thought I had was gone,” Robb said. “I had a lot of dark thoughts. I didn’t want to be alive.”

After about a year of trying to figure out the reason that this had happened to him, a chat with his brother-in-law helped him accept his situation.

“I think I know the reason you were hit by a semi truck,” Robb recalled him saying. “Because you were going too fast on an icy road.”

Robb started to realize that he had control over the direction of his life. He formed his band, Live On Arrival, and they found success, touring with larger bands and getting some of their songs on the radio. Yet he felt in his heart that he had a different calling. When later given the opportunity to start performing his songs and telling his story in schools to students and in prisons to inmates, he changed his mission from music to suicide awareness and to helping kids discover their own life’s purpose.

After receiving dozens upon dozens of no-longer-needed suicide notes from the teenagers he’s spoken to in schools, Robb picked 120 names from the notes and had their signatures tattooed all over his right arm. Now, when he gives a talk, he is able to hold up his right arm and say,

“Look, here are 120 kids who have those thoughts just like you and they’re still here. Your life isn’t over. There is still a purpose for your life.”

One of the names is of Taylor Bowman, who was 15 years old when Robb came to her school. Taylor had kept a suicide note under her pillow for several months. She had a bracelet that she’d always worn and her plan was to wait for when the stress became too much, and then to leave the note and bracelet for her mom.

After listening to Robb and all of his stories of survival, Taylor started to believe that she could survive too. After the rest of the students had left the room, she walked up to Robb and gave him her note and bracelet.

“I don’t plan on leaving it for anybody, anymore,” she told him.

“We’ve all got a story,” Robb says to students. “I had voices in my head trying to take me out. There is someone out there who needs your story. You are going to meet a kid someday going through the same thing and you’re going to recognize it and you get to be that kid’s hero.”

During Robb’s presentations, he always shows videos and tells stories of the other teenagers he’s met who were once suicidal, and who are now living their best life. His main message that he wants everyone to remember is: you are not alone.

The tattoos on his right arm are proof of that.

Lifeline call support centers have many loving and wonderful people waiting to listen and talk with anyone who is feeling stressed, overwhelmed, or who is considering suicide. If you or someone you know is considering self-harm, please have them call:

or find a crisis centre here.

He Sat Quietly Alone In A Restaurant For Two Hours And Paid Over $2500...