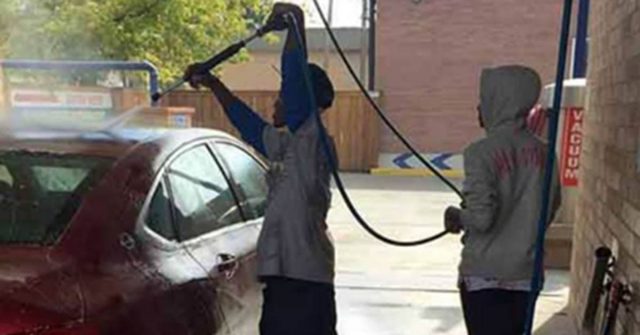 When a young man sitting outside of a convenience store asked Ariane Nelson if she could buy him a gallon of milk, her heart was inspired to help him as much as she could.

“This young man approached me and asked me to buy him a gallon of milk,” Ariane explained. “My first thought was to say no but as I was paying for my gas I grabbed the milk. Outside was his girlfriend holding a box of cereal. He thanked me and I started to walk to my car. Something in me made me turn around. I told them I was about to get a car wash but if he wanted to wash it for me I’d pay him $20. We went to the nearest car wash and he had tears in his eyes after I paid him!”

The young man was so deeply grateful that Ariane had gone out of her way to help him.

“He told me that more than anything he appreciated me giving him the opportunity to be a man again in the eyes of his girlfriend and work for the money. The whole time his girlfriend helped him. It’s like she was proud of him. You could tell the love was so real. Real beyond material things and what he could do for her. She told him he did a great job and he couldn’t stop smiling.”

As he was washing the car, Ariane got to know the appreciative couple and learned that they had been searching all around town for help and for work. She then decided to also give them some of her nice clothes to help out.

“I had a long talk with him and her and he had a backpack full of paperwork from all of the places he’s been going to get help for them. I drove them to my apartment complex and gave him clothes for interviews and a few outfits and fitted caps. I don’t have much but life is about sharing what you do have.”

Ariane shared how important it is that we empathize with and help one another.

“Be a blessing to someone today because you could be in that situation before you know it! I gave them my number and I plan to take them to any interviews or appointments they have. It’s a great day to be alive no matter what your situation is. Someone has it worse than you! Share this message and inspire others to do good.”

Thousands of hearts have been moved to tears by the beauty of Ariane’s experience.

“So this made me cry! I pray everyday that I can be a blessing to someone…anyone! And I always say that could easily be me so I try to treat people he way I would hope to be treated. Stay kind!” commented Tanya R.

“I remember when we, my husband and I we’re in our first year of marriage, I was very pregnant with our first son and we got stranded in a parking lot cause something under the hood of the car was broken and we couldn’t drive it. We we’re so worried and didn’t have much money at the time. After several hours of my husband trying to fix the car, a guy in a pick up truck came over to us and offered to fix our car. He spent about an hr to fix it and my husband gave him whatever money we had to show our appreciation. He didn’t take it and just said that he just wanted to help. The weird thing is that, that night it was sprinkling and no one would want to work on a car in the rain and this man did! When he got in the car, my husband and I just looked at each other and looked at the guy, but he was GONE! There is no way he could have left that fast. ….We to this day, think he was an angel. I will never forget this memory 14 years ago and I wish we could see him again and say how much that meant to us.” commented Mekala W.

“I was a foster parent many years ago. One of my “sons” was in a group home and I went to pick him up for Christmas and New Years. When I picked him up, the house leader said there was one boy whose parents backed out at the last minute so I took him home with me too. That night I went shopping for presents for him. A few days later, I got a call from the house leader who said 3 boys came back early and without anything, and I went back and picked them up. Our house was full, they all had a Christmas with gifts under the tree, and before they went back to the group house, while I was at work, they cleaned my house, top to bottom. When I got home from work and saw everything no so nice and sparkling, they said they didn’t know how to thank me so they cleaned for me! Of course I cried and hugged them all in a group hug. It was the most meaningful Christmas in my life, even to this day. I’ll never forget that group hug, and how complete it made me feel! That was in 1983. I’m now 69 years old and I still get warm inside when I think of those boys. They have a place in my heart forever!” wrote Travis L.

Kind Employee Kept Bakery Open By Herself After Owner Had Health Issues To Help...

Kind 7 Year Old Finds Winning Scratch-n-Sniff Ticket And Then Donates It To The...