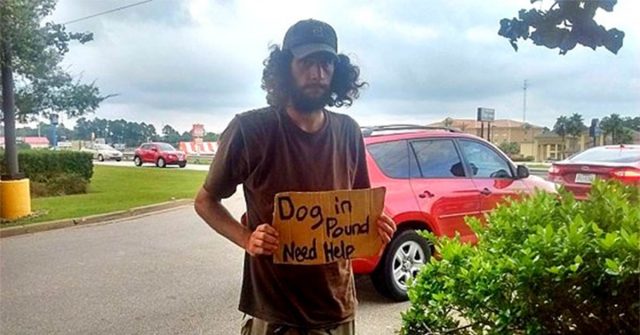 When a kind woman saw a homeless man holding a sign which read, “Dog in pound, need help,” she took her time to help the sweet homeless man get his dog back.

Wilma Price was driving through a parking lot in Huntsville, Texas, when a homeless man’s sign caught her eye. The sign read, “Dog in pound, need help.” Wilma works with rescue animals, and as she drove by, she wondered about the homeless man’s situation.

“I looked at him and I couldn’t get over it. He looked like a little boy standing there, lost,” Wilma said.

“Wow what a day today has been,” Wilma shared in a post online. “I run through [the] Walmart parking lot and I see a homeless man sitting on the side of the road and the sign says [my dog is in the pound help]. Of course what do I do – I’ve seen every sign in the world except that one. I’ve seen “I need a beer”, “lost my job”, “need help”, I could go on forever but never this sign.”

Wilma pulled up next to the homeless man and asked him about what his sign meant. The homeless man, Patrick, explained that his dog was in the pound, and that he couldn’t afford to pay the fee needed to release him.

“At first I called the pound to verify if the man’s story was true and they said yes, and it was $120. I asked why so much? The pound said because $35 was for impoundment fee, then they gave [the dog] a rabies shot, a heartworm test (yes the dog was negative) and put on a flea prevention. They said yes the dog was in good shape.”

Wilma did not have enough at the time to help the homeless man financially, so she called one of her dear friends and told her about Patrick. Her friend said she would come down to learn more about his story as well.

“So now when I don’t have a dime to my name I call a dear friend to sponsor money. I tell her about this guy, she says, “We’ll go back and find out his story”, so I did. 30 years old, his name is Patrick. I talked to him for a few minutes and he told me his circumstances and stuff.”

Patrick had been arrested for trespassing recently, likely from sleeping outside near a business, and during his two days in jail his dog had been placed in the pound.

“He seemed like a nice, gentle soul who just happened to have a hard life,” Wilma said.

Wilma’s friend then agreed to pay to help Patrick get his beloved dog back, and Wilma and Patrick went to the pound together. His dog, Franklin, was overjoyed to see him.

“I told him, “Well I’m getting the money to get your dog out so let’s go down to the pound.” Me and Patrick go down to the pound, give them all his paperwork and a copy of the rabies [vaccination], but they had already re-vaccinated the dog. Patrick went to jail for trespassing, they kept him there for 2 days and impounded his dog Franklin. The dog was shaking when he came out of the pound.. so happy, happy to see the man.”

“So sometimes you just have to dig deeper and do what’s right in your heart. That man loves that dog. On his backpack was the dog’s bowl and toys. It’s helping the dog against the world. The man was very, very grateful. He had tears in his eyes when the dog came out.”

“We’ve all been in a bad situation in our life, so remember to always pay it forward. You never know who that person might be that you help. But I know for a fact that man loves his dog and he tried to give me the money he had collected. I wouldn’t accept it because maybe he can have some dinner tonight. He said his dog eats before he does. Wow, that sounds like me too.”

“I wish I had the money to get the man a room for a week and let him and Franklin regroup but unfortunately I don’t. all I can do is give him his dog and pray that life gives the man a break. I cried after the man and Franklin left. I had dropped them back off in Walmart parking lot. God please bless Patrick and Franklin tonight.”

After reuniting Patrick with his dog, Wilma and a friend of hers named Jill, who volunteers for an animal rescue, decided that they wanted to do more to help this sweet homeless man. They setup a GoFundMe for Patrick, and were able to raise $20,110 to help him have enough food for himself, for Franklin, and to have a place to live.

Patrick was overwhelmed with love and gratitude.

“You did more for me than most people have done in my life. You don’t know how much I thank you,” he said.

“The lesson here is don’t judge a book by its cover,” Wilma said. “That’s the whole thing. Everybody deserves a chance.”

Watch this video of Wilma helping Patrick reunite with Franklin:

Homeless Teen Living Under Bridge Had To Give Up His Dog; Kind Community Found Them A Home Together

Danny And Ron Have Saved More Than 11,000 Abused, Abandoned And Unadoptable Dogs

Kind 8-Year-Old Boy Spent 2 Years Growing His Hair Out To Make Wigs For...

The Secret To Getting Rid Of Back Pain Is In Your Feet: 5 Exercises...

When You Love Someone, You Stay Loyal To Them