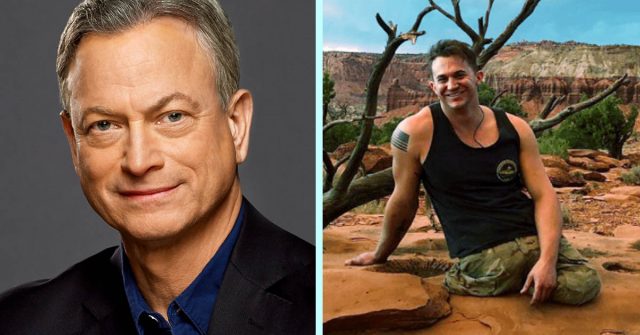 Forrest Gump star Gary Sinise, also known as Lieutenant Dan, made a phone call to a marine who had lost both of his legs in Afghanistan to let him know that he would be gifted a new custom-built home to meet his current needs and to make sure he is taken care of.

While first astonished to not only be talking with Gary Sinise, but to be receiving a brand new home built just for him, veteran Jonathon Blank was filled with deep appreciation and gratitude.

“It’s such an incredible gift,” Jonathon said. He explained how the custom home is going to make his “next phase of life much easier.”

Jonathon Blank joined the marines in 2006, was deployed to Iraq in 2008 and later to Afghanistan in 2010. While on a mission, a hidden bomb went off causing Jonathan to lose both of his legs.

“On October 26, 2010, Jonathon was severely injured by an improvised explosive device (I.E.D.) while conducting a long-range reconnaissance mission in Afghanistan,” the Gary Sinise Foundation website explains. “He sustained shrapnel wounds to his left arm and head. The blast also severed his legs. Jonathon remained calm, realizing that panicking would only make his situation worse as his fellow Marines tried to get him to safety. He was taken to several military hospitals before returning to the United States. Jonathon’s rehabilitation at Brooke Army Medical Center lasted from December 2010 to March 2014. His time there was full of both progress and setbacks. Despite the difficult situation, Jonathon was unwilling to let his injury stand in his way. Jonathon remains active outdoors and even goes skiing.”

Despite four years of rehabilitation and Jonathon’s incredible will to get through anything, he still suffers from migraines, insomnia and chronic pain. He also usually has to physically pull himself up and down stairs and up onto kitchen countertops in order to open cabinets and get what he needs.

“The world is not meant for people with disabilities,” Jonathon said. “It’s just a hard truth and that’s something that I’ve dealt with every day since I was injured.”

“He’s dragging, hauling all his stuff up and down the stairs all the time,” Jonathon’s girlfriend said. “Nothing slows him down, but just to imagine cupboards that he can pull down and reach rather than having to jump up there — it’s going to be such a huge difference for him.”

Jonathon’s fellow marines were also deeply touched by Gary’s act of kindness for their friend.

“Even some of those tough guys, when they found out about this, they got pretty emotional about it,” Jonathon said.

For those who remember Gary’s role as Lieutenant Dan in Forrest Gump, he had also lost both of his legs in war, and after a long struggle with depression, managed to get his life back together. Gary has since developed a great level of understanding and compassion for disabled veterans, and his foundation has helped build more than 50 homes for those who have been wounded in service.

The custom smart home will be constructed within one year by Jorgenson Builders, a company which helps build the custom homes which are gifted from Gary’s foundation.

“We really have to be thinking about how they are going to access each of the levels of the house,” Jake Jorgenson said.

Jonathon’s new home will be energy efficient, have light fixtures and shades which are all on remote control via iPad, will have numerous voice activation abilities around the house that can open doors and play music, and it will include a customized kitchen. The home will also include a stair lift or elevator to help Jonathon easily get up and down stairs.

The customized homes not only make the lives easier of our wounded veterans, but they help to extend their lives.

The home will be built in Utah’s countryside and will have large windows so that Jonathon can enjoy the mountain views; something which he says is “therapeutic” for him.

While so many veterans face the horrible circumstances in war, and then often come back to live the rest of their lives with injuries, longterm PTSD, and regular struggles with homelessness, it’s beautiful to see Gary Sinise doing everything he can to make sure that our veterans are well taken care of. A big thank you to Gary Sinise and his foundation!

If inspired to donate, donations to the Gary Sinise Foundation can be made here.

Kind School Bus Driver Buys Breakfast For 50 Students Who Couldn’t Eat Because Of...

Shaking Elderly Man Asked Pizza Shop For Food That Would Be Thrown Out, Manager:...