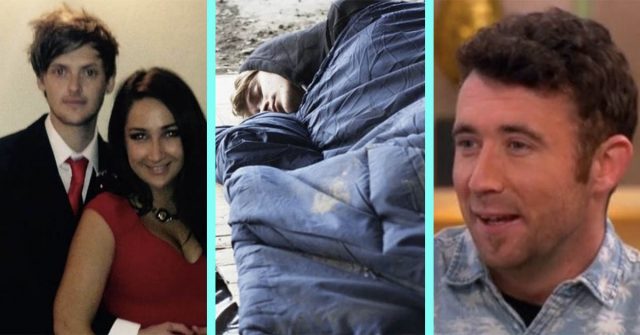 After a young couple missed their last train home on a cold night, a nearby homeless man had compassion for them and offered to share his jacket and blanket to help keep them warm.

Charlotte Ellis and her boyfriend, Taylor Waldon, were having a night out in London and didn’t make it back to the train station in time for their last train home. The morning train wouldn’t come for another four hours, and temperatures were below freezing. Charlotte was shivering as they discussed what to do, when they heard a voice behind them say;

“You can borrow my coat and duvet if you want. It’s a long wait and it’s freezing tonight.”

They turned around to see a homeless man, named Joey, offering them his jacket and his duvet to keep warm. Moved by his thoughtfulness and kind gesture, they accepted his kindness and used his duvet blanket.

“In the early hours of Thursday morning my boyfriend and I were out in minus conditions waiting for the train station gates to open, only to realise we would have to wait 4 hours for them to open,” Charlotte shared in a post online.

“In our drunken state we had got confused and missed the last train. After waiting for a while it’s getting pretty nippy. Only for a voice from behind me to say, “You can borrow my coat and duvet if you want? It’s a long wait and it’s freezing tonight” I turn round and see Joey for the first time. I jump straight under the duvet and thank Joey for his kind offer as Taylor gives me the look 😂”

Charlotte and Taylor sat with Joey for around half an hour and had a friendly chat with him while staying warm. He had been homeless for around 10 weeks, and knew how cold the nights could get. The couple could see how sincere and caring Joey’s heart was the more that they got to know him.

“After Taylor and I sat with Joey waiting for our train, there was just something about him that was so sincere I couldn’t leave him out there on his own. No one deserves to be out in these conditions. I’m not saying that you should trust everyone you meet on a street corner, but who exactly should you trust?”

Charlotte and Taylor decided to take a taxi home and told Joey that they wanted him to stay at their place rather than sleeping out in the cold. Joey refused several times, but after a bit of insistence, he eventually agreed that he would come to stay warm for the night.

“I told Joey that I refused to leave without him, at first he declined in dismay at the offer of coming back home with my boyfriend and I to have a good night’s rest, a shower and shave and a good old meal. He thought I was joking.. I really wasn’t. It took Taylor to explain that if you don’t come with us I’m not going to get her home. Joey finally accepted.”

“We get a cab home and much to Joey’s horror he ends up in the cabin in the woods, in the middle of nowhere (I can’t even begin to imagine what he must first initially of thought😂) Joey put all his trust into us. As much as we put all our trust into him. We talked for hours, we exchanged life story’s and instantly became the best of friends. It’s something I can’t even explain, it was just meant to be.”

After chatting a bit more at their house, they showed Joey to his room and he was able to sleep in a comfortable, warm bed, compared to the cold hard concrete he had been on for for past few months. To show his gratitude, Joey tried to offer Taylor his jacket, the only thing of value that he had, as a thank you gift.

“Before the night is over, before Joey had his first night in a bed, Joey offers the coat on his back as a token gift to my boyfriend as a thank you, as a token of his appreciation. In my eyes this gift had such a powerful meaning behind it, more than any ever gift you could ever receive.”

They let Joey stay for several days, treated him to meals, took him for a haircut, gave him a phone, introduced him to friends and helped him get a new wardrobe.

“We invite Joey to meet some of our friends who (all initially said that we were [crazy]) but now all completely understand and have all fallen in love with him. I cannot thank my friends for how amazing and generous you have all been, especially Jenni, Brad & Gemma. We have taken him for Indian, we have had his hair cut, we give him a phone, my friends give him a new wardrobe, they go play football, watch Django, the boys play playstation, he helps my mum feed the horses, he has a roast dinner!!! We treat him as we would treat anyone else. We have faith in him, we help him. But more importantly we give him our time and friendship. He’s taught us what life really is, he’s taught us what real friends are and I can honestly say that it’s the most amazing feeling I’ve ever felt.”

After just five days, Charlotte and Taylor helped Joey get a job interview, and he was hired.

“Joey in 5 days had a job interview today, I can now confirm that he now has a job. IN 5 DAYS!!! Joey is now not living on the streets!!!! All he needed was someone to have faith in him and to help be that stepping stone to make a difference to someone’s life. Joey is the most amazing, caring and incredible human that we have ever met, and I’m so blessed to of been a part of getting him off the streets.”

“Because Joey was “homeless” people were quick to judge and even though I do understand why people panic, but why should it be that way? Why have we let it get this way? It doesn’t need to be this way? We are all the same, the same beginning the same end. Just some people carry more paper than the next in between. Just because someone is “homeless” it doesn’t make them any less of a person than me or you and it doesn’t mean that all “homeless” people are drug or alcohol abusers, not all homeless people should be instantly tarnished as bad people. They are just like me and you. Yes he was “homeless” but after spending the past 5 days with Joey I despise even considering him as “homeless”. Joey is our friend, and he was just down on luck.”

“Sometimes all someone needs is someone to give them a little bit of their time. Someone to restore their faith in humanity. I share this story for one reason only: please just give a little time to stop and ask them how their day is, make them know that there are people out there that do care. Just give them a little bit of your time. It costs nothing. Have faith, take the risk, be kind, make that change, and be that change. Because at the end of the day, we all have the ability to be good people.”

Homeless Man, 55, Breaks Down In Tears After Seeing The Results Of His INCREDIBLE Transformation, From Scruffy To Handsome After 25 Years On The Street

He Befriended This Homeless Man, Got Him Lunch, A Shower, New Clothes And A Job