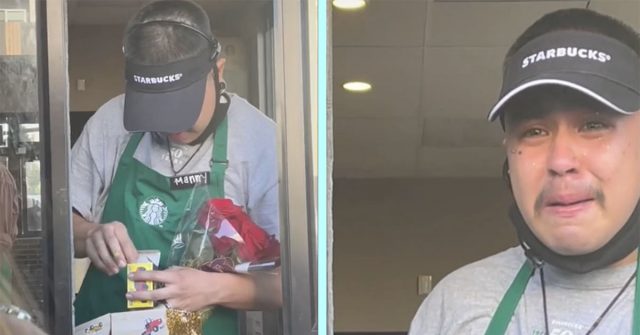 When a struggling cashier was having a difficult day, a kind customer in the drive thru surprised him with flowers and a tip of $1,000 to help him buy the car he was saving for.

The cashier, a Starbucks barista known as Manny, was having a normal day at work serving coffee to customers in the drive thru. But unknown to his coworkers or customers, Manny was privately struggling with depression.

As Manny was taking orders, a young woman named Perri Saenz pulled up to his drive thru window. Perri works with the Dream Machine Foundation, a group whose goal is to find and help everyday Americans through random acts of kindness.

As Perri came to the cashier window, Manny greeted her, and Perri asked him a few questions.

“What is your dream in life?” she asked.

While it seemed like a big question, Manny said that at the moment he was working to get himself a car.

Perri asked how much one would cost, and Manny said that he still needed to save another $1,000.

“What’s something you’re struggling with?” Perri asked him.

“I have depression I’m currently fighting with,” Manny shared.

Perri then went shopping with her friend and purchased a bouquet of flowers, a few small gifts, a box which they decorated with glitter and stickers of cars, and a miniature toy car.

Inside of the toy car box, they put $1,000 in cash for his car to surprise Manny with, and then drove back to the drive thru.

“We were really inspired by your story, and we wanted to get you a little something,” Perri said to Manny.

Perri handed Manny the bouquet of red flowers, to which Manny smiled and thanked her.

“Thank you so much. I’ve never gotten flowers before,” Manny said.

“We have one more thing,” Perri said as she handed him the gift box they had decorated.

As Manny opened the gift box, he found the toy car inside, along with the $1,000.

Manny was quiet for a second, and tears began to fill his eyes. He was so surprised, and thanked Perri over and over again.

He also shared a bit more about how he had been struggling that morning.

“This morning actually… I had suicidal thoughts and I didn’t feel like waking up…” Manny shared.

“This is just a sign from God that you’re meant to be here and that you’re so loved,” Perri said while holding his hand. “Light will shine on your face again.”

“You just saved a life. Kindness is key,” wrote one grateful heart.

Wanting to help Manny more, the Dream Machine Foundation started a fundraiser to help him get a better car than the one he had been saving for.

“He takes the bus to work every day, because he doesn’t have the financial means to afford a car. We started out the donations by giving him $1,000, but to get a good car we set a goal to raise him $10,000,” the fundraiser said.

While their initial goal was to raise $10,000, kind hearts from around the world donated and helped raise $38,572 for Manny’s new car.

Morgan Freeman Converted His 124-Acre Ranch Into A Giant Honeybee Sanctuary To Save The...

This Coffee Shop Opens Its Doors Every Night To Stray Dogs So They Can...