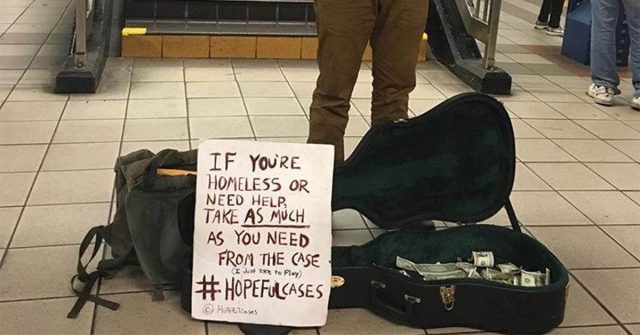 While taking the train home one day, a passerby saw a sign by a kind man playing guitar which offered all of his tips to anyone who was homeless.

Reddit user MarryMeALot was on their way home on the New York subway, when they noticed a kind sign made by a man playing guitar.

“If you’re homeless or need help, take as much as you need from the case (I just like to play). #HopefulCases,” the sign read.

Inspired by his generosity and kindness, they took a photo and shared it online, and tens of thousands of hearts also appreciated the guitar player’s gentle gesture for those in need.

People learned that the kind guitar player’s name is Will Boyajian, and that he’s been playing guitar in the subway for around a year and donating his earnings to the homeless or to anyone who needs some help.

“When I first started this, a lot of people said like, ‘Well, people are just going to take all of the money…’ and they don’t… because they’re people.”

Will first began playing his guitar for those in need after seeing numerous homeless people on his way to work. Seeing their struggle gave his heart a deep feeling of compassion, and he wanted to do something to help.

“The issue of homelessness really bothered me. This was how I felt I could help,” Will said. “As anyone who lives in NYC or any major city knows, your options are either to ignore it, notice till it eats you up, or do something. This is what I thought I could do. These people in need are our neighbors, and I didn’t wanna ignore them.”

Will created a charity named Hopeful Cases, which started as him playing guitar and giving 100% of his tips to the homeless, and has turned into a project which inspires artists from around the world to play their instruments outside and to give their tips to anyone nearby in need.

“The point of this project was to change the way we think about giving, the homeless and poverty,” Will explained.

The Hopeful Cases about page explains that what they do is simple:

“Simple. If you’ve got extra to share, share it. If you need help, take it. You’re our brothers and sisters and neighbors and friends. So, of course we’ve got your backs. We know you would do the same. We’re here to give, not to judge.”

Will shared that while some subway-goers were curious if he himself was homeless, that he is not.

“I am not homeless. I know I look homeless, but it’s mainly cause I like flannel and get a lot of ingrown hairs on my face,” he humorously said.

Watch this heartwarming video of Will playing guitar for the homeless: 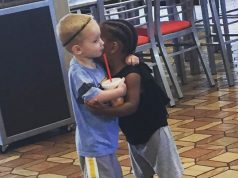 Sisters Are Special from young ones to old, Life gave me a Sister, more...